Taking lines ashore is a technique used mainly in Greece and Turkey, as well as some places in Croatia, where swing anchoring is not possible. This may be due to the crowded nature of the bay, the steep drop-off close to the shore, or both. Mastering this technique means you can enjoy the many free and natural anchorages around the eastern mediterranean.
Materials:
For the warps we have chosen 2 x 50m lengths of 16mm polypropylene, laid, float rope. You could equally use plaited however it is easier to do eye splices with laid rope. We have found 50m is long enough 99 percent of the time. On one occasion we did extend one of the warps by attaching another line. That was a temporary move in a crosswind and once we had the 2nd line on a we could reposition and shorten up both lines, removing the extension. We are usually anywhere from 20-30m off the shore.

In addition to the warps we have two separate lines approximately 4m of 18mm poly, laid float rope, with an eye splice at each end. To each of these we attach a marine grade harness clip or carabiner. These shorter lines are threaded through the eye splice in the warps and form the loop that is used to go around a rock, tree or bollard on the shore. Depending on the length required, it can be clipped back onto itself or back to the warp. The short section of rope goes around rocks which may be sharp, so inspect it regularly for chafe and replace when necessary. We carry spare line to make replacements if needed. 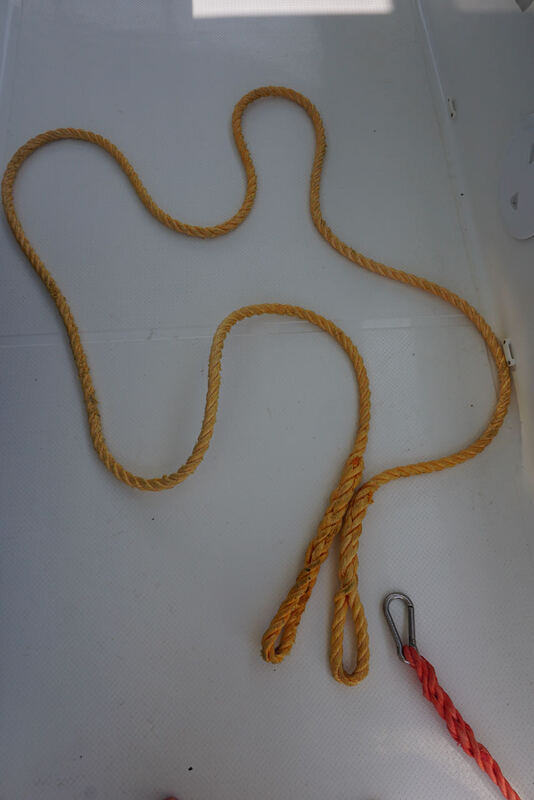 Separate rope which goes over the rock 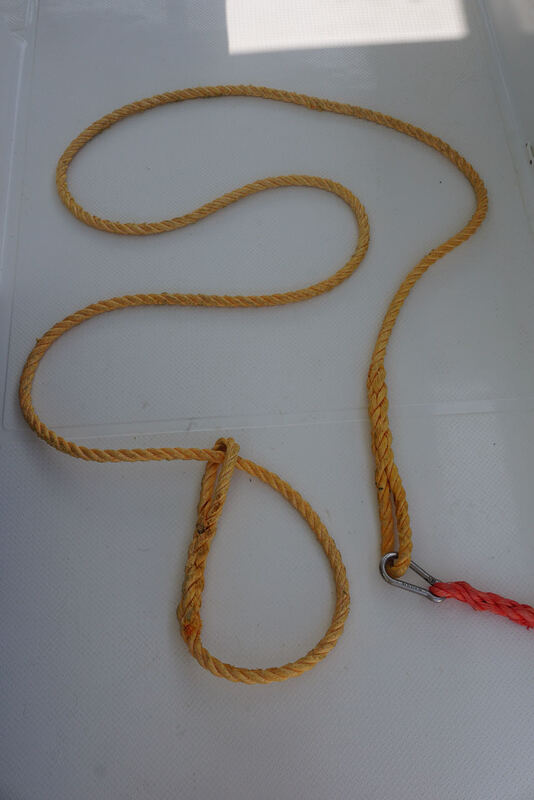 Looping it back on itself makes adjusting the size easier. 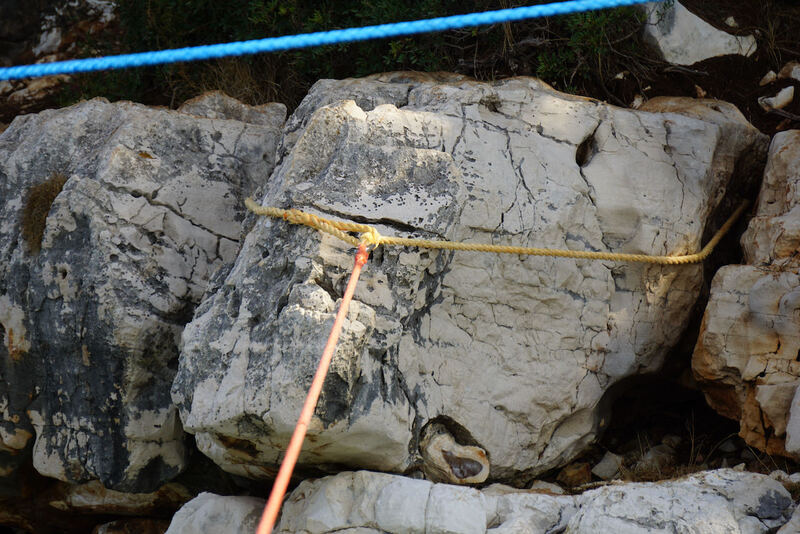 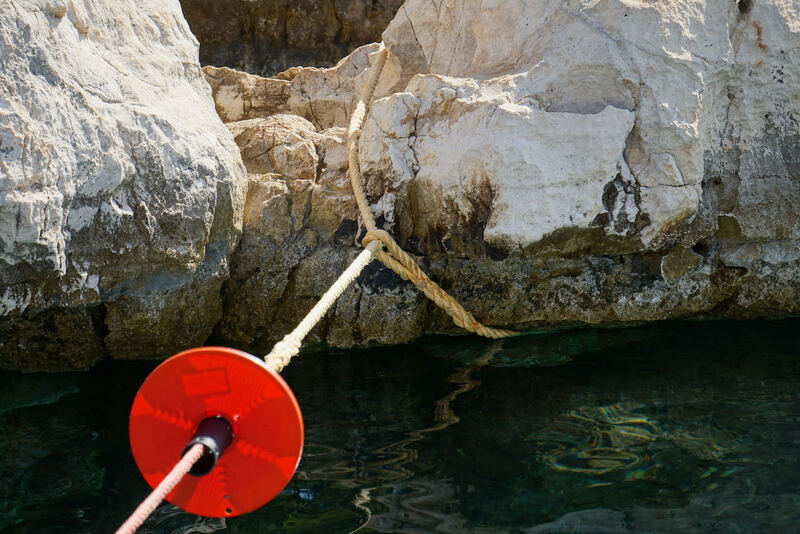 That rock is not going anywhere!
Below: A clip showing the shorter loop
Alternative materials:
Some people use webbing straps for their lines ashore and these can stow neatly on a reel on the side of the boat. The downside is that these do not float and can be heavy to swim with when they get wet. We have also seen some cruisers use a wire cable or even chain for the shorter section that goes around the rocks. No chafe, however heavy and uncomfortable to swim with and not as easy to adjust the length.
So that leads us to the process
Try to reverse in at right angles to the shore, dropping your anchor in no more than 25m when in deep water, which may be 2 boat-lengths out from your final position. It is best to control the anchor from the foredeck initially so you can make sure it is running freely but the helm will need to call the depth for you. You wont be able to see the bottom so you are reliant on research and reviews as to what is down there! Once the anchor hits the bottom you can start gently motoring back at the pace you are paying out the chain as you want to keep a reasonable amount of tension on it but not drag it. When you are roughly in position, put the gears into neutral as your swimmer enters the water, then your swimmer or paddler can head to the shore, back in gear now you can control the boat whilst the lines are secured. Always fit the windward line first.

As you can see above, we have the rope spools for the warps which are attached horizontally across each transom with a converted broomstick. It is important to ensure lines can run freely, so the swimmer is unimpeded. As we leave the rat guards on the lines permanently, these can cause issues so the skipper needs to make sure these are tossed into the water behind the swimmer.
I will then swim back towards the boat to get the second rope, which the skipper may be kind enough to toss to me. You want to be careful not to have too much loose rope in the water as you may need to reposition and you dont want it ending up around the props.

Once both warps are attached to the shore the skipper will tighten these and the anchor as well. We do put a retainer onto the anchor chain so that the force can be removed from the windlass, so for the most part the adjustment is done to the rear lines. It's good to sit and watch your handiwork for a while as the anchor settles. As the boat "swings", the leeward line will slacken and can be tightened at the boat end.

Note that if your anchor comes unstuck it is best to retrieve the shore lines and start all over again from scratch, rather than trying to fix the situation with lines and a swimmer in the water, and all of the anchorage watching you! Alternatively you can find another spot and pretend you meant to move...
​ 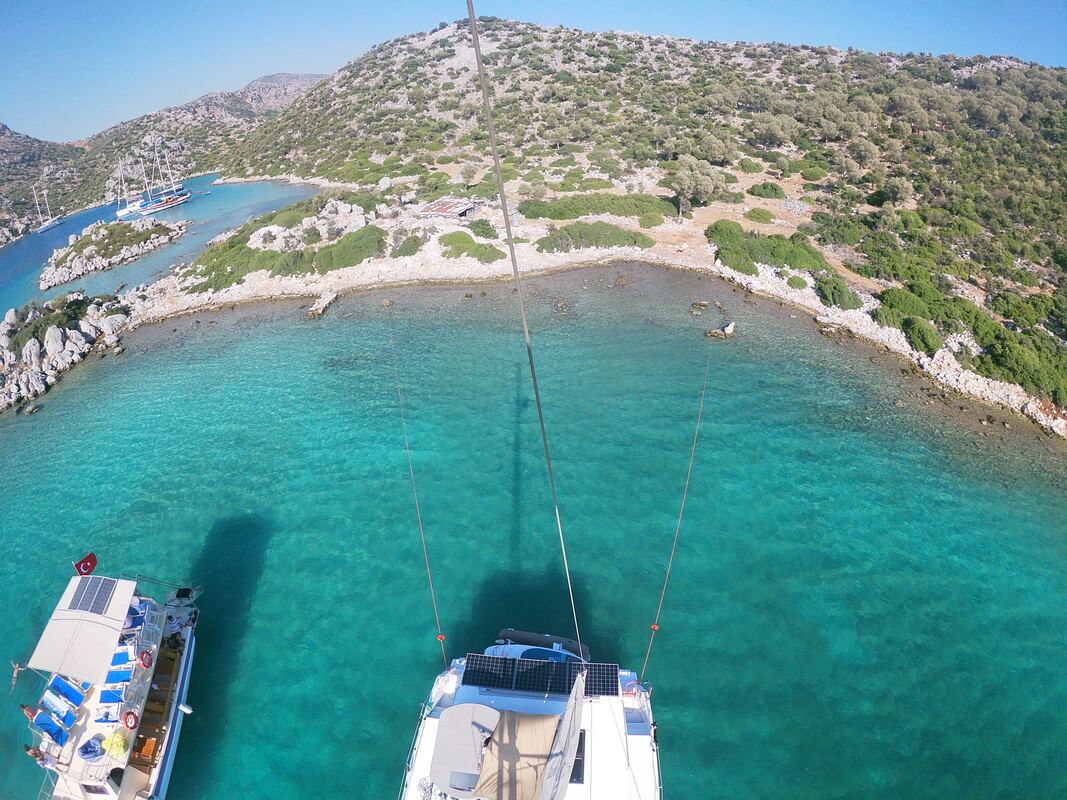 Above: In a shallow bay or inlet its great to have a catamaran and tie ashore. You can own the space.
Weighing anchor
You always hope you dont have to be doing this in the middle of the night when an unexpected storm comes through and dislodges your whole arrangement...

​Leaving the anchorage is fairly simple though. 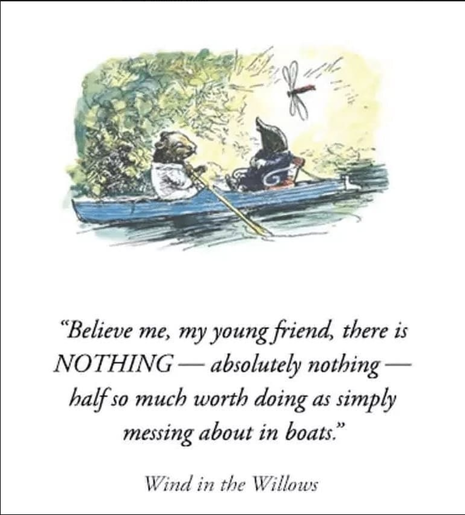