​When we ordered our Helia we had the option of choosing freshwater or saltwater flush for our 3 heads (toilets). Of course, there are pros and cons for either choice and we did agonise over the decision; there is an additional cost for freshwater flush, not to mention the ongoing cost of replenishing the copious quantities of freshwater that go back overboard. Balance that against the “stigma” associated with having saltwater heads – don’t they smell?!

Those of us who have sailed on race yachts are scarred by memories of manual pump, saltwater heads that maybe got used once a week and then left to fester between races. With saltwater sitting in the heads for a week or more, marine bacteria and algae party on, releasing that familiar, rotten-egg odour. This was enough to bring tears to your eyes. Saltwater heads are smelly, right? Well, actually no they don’t have to be. If they are used regularly and properly managed there are really no untoward smells at all. So fear not! You can save your money and energy and tick the saltwater flush option.

What is all the fuss about?
While you might think number twos are the main offender when it comes to smells in the heads, in terms of saltwater heads its actually number ones that are the culprits, in a round-about way. Knowing a little bit of basic chemistry can help to understand how to manage saltwater heads, particularly when you are living aboard for long periods. So bear with me as I channel my inner scientist and update your year 7 chemistry. 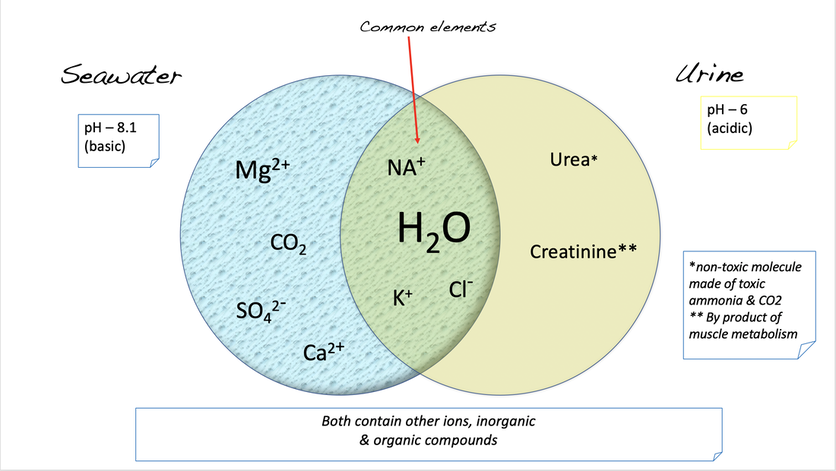 ​Although seawater and urine have a lot in common from a chemical perspective, when they come together their contents can recombine in new and interesting ways to form “scale” or insoluble salts. Salts that might have been soluble in slightly acidic urine, may be less so in slightly basic seawater. (Compare this to your kettle where heat forces limescale or Calcium Carbonate out of solution to deposit on metal surfaces) At first you might notice some brownish film on the toilet bowl that doesn’t respond too well to toilet duck and a brush. It is best removed using an acid based cleaner, such as vinegar (pH 3) and fresh water. In fact, it’s best to avoid alkaline-based domestic cleaning products (including those containing bleach) in saltwater heads as they can just exacerbate the scale problem. Not to mention they are not very nice for the environment, into which they will be eventually released. 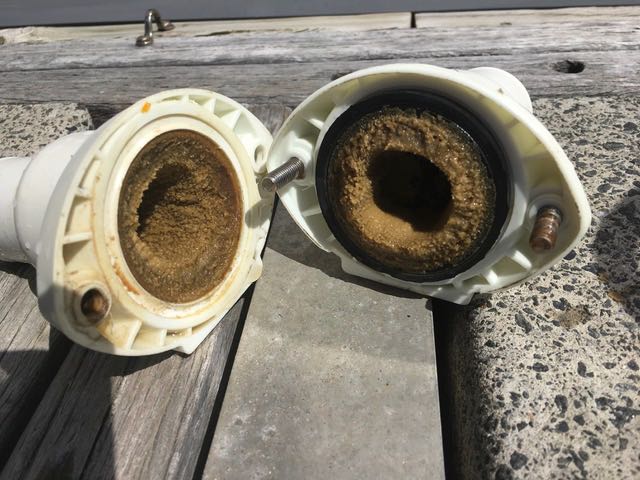 Scale build up in pipe and non-return valve 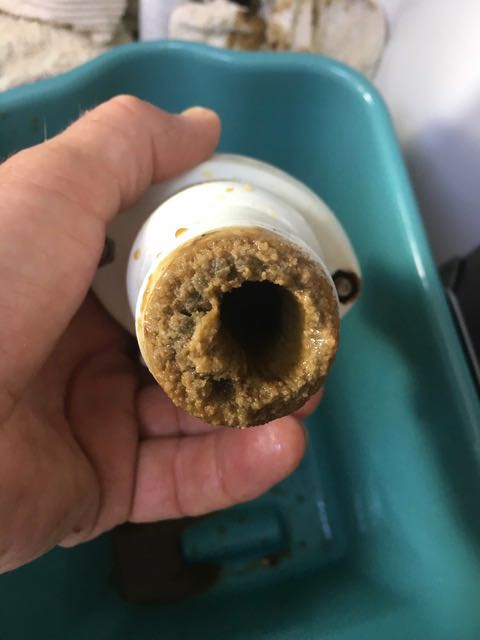 Eeew! Looks gross but no odor. 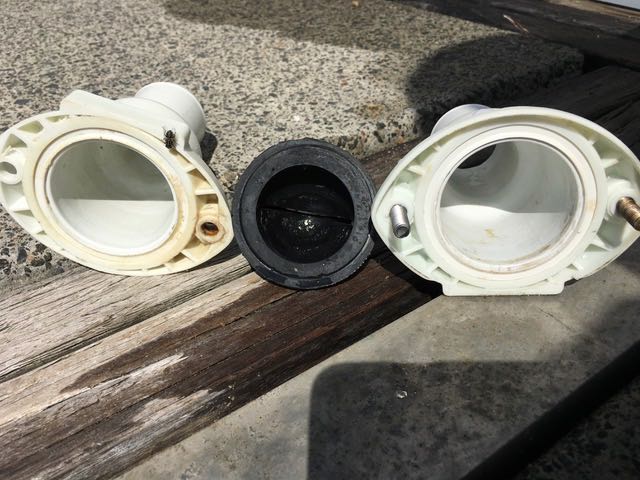 That's better
Above: Pipes occluding with scale from our previous boat, a Lipari Evo 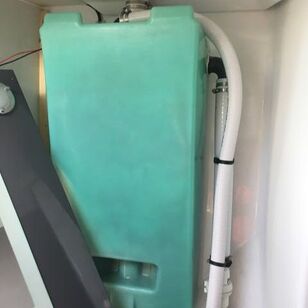 Scale formation on the inside of the holding tank (Lipari)
​
​While you can see the scale in your toilet bowl, you can’t see it growing in your pipes, valves and holding tanks. Over time this “silver lining” will build up, setting as hard as concrete, making the heads progressively harder to flush. Although with an electric pump it may be difficult to detect the subtle changes in sounds that mean the pump working harder and harder. If left unchecked, eventually the scale will occlude the narrow pipes completely, or block valves so that they can no longer function. This “scale” can also form a sheet-like lining on the walls of the holding tank which if it peels off can settle over the outlet and block it. If you get to this point you are in a world of pain, particularly if the tank is full… I am going to leave you to contemplate how you might to get out of this situation, suffice to say you just don’t want to get into it!
​After consulting some fellow sailors we were able to establish the Turkish name for this magical stuff (see above) and promptly procured several litres. I would recommend buying the strongest concentration you can find (seems to be 20% so far) and you can get it in hardware stores, some supermarkets and variety stores. The lower the concentration the more you will need, but a larger volume will cover more surface area. I started with a 5% solution made up in an 8L bucket with freshwater. Always wear gloves and safety glasses when handling acid and ensure your heads are well ventilated! And of course, add acid to water, not vice versa.
Here is how its done
Why it is ok to pee in the ocean
There are a number of reasons scientists (more qualified ones than me, that is!) think its ok to pee in the ocean. As you can see from the chemistry lesson above there are a lot of similarities between urine and seawater, the most obvious one being the amount of water in each (>95%). Urine is quickly diluted in the sea and those insoluble salts that cause problems in your heads, simply float away. Clearly fish are regularly doing it in seawater (weeing that is…) all the time, and urea actually provides a useful plant nutrient. If you have the luxury of having multiple heads on your boat, many cruisers reserve one exclusively for “number 1s” (leaving the sea cocks open). If you don’t put paper down the loo this practice really isn’t much different to taking a pee when you are swimming, which research shows 99.3%# of people actually do.

Conversely, it’s not ok to pee in the pool! Clearly there is a much more limited dilution factor in the pool, not to mention a higher concentration of your fellow humans and no plants to enjoy those nutrients! In addition, urine reacts with the pool chemicals (especially chlorine) to produce new compounds (chloramines) that cause skin and eye irritation.
(Check out this fun video to learn more) 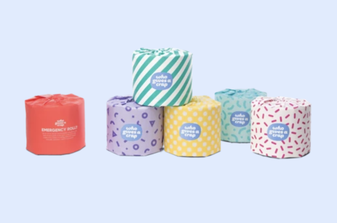 Who Gives a Crap TP, a great cause to support
Paper in the pooper
We all know that certain things should not go down the boat toilet, due to the size of the pipes which increases the chance of blockage. Only number ones, twos and toilet paper (or the 3 ps: pee, poo and paper. Some folks don’t allow toilet paper to go in, some do. An electric macerator pump will make light work of a standard handful of 2 ply paper (whether scrunched of folded) and if you empty your tanks overboard regularly this probably won’t be a problem. On ITIKI we compromise – TP from #1s goes in the bin, TP from #2s goes in the bowl. My rationale? Urine is sterile, poos are not -  and as a microbiologist I am not happy to have poo-ey toilet paper and its associated germs “hanging around” in bins on board. 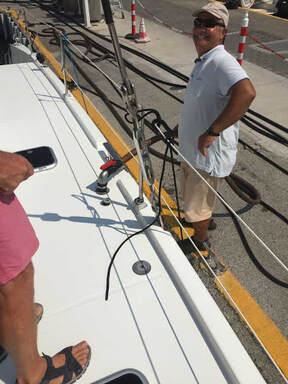 No feeding the mullet
If you find yourself in a marina, inland waterways or Turkey, where pumping out is the only way to empty your holding tanks, there is potential for residual “sinkers” to build up on the tank, along with a gooey mix of papier mache. There is always a little bit of “stuff” left at the bottom of the tank after a pump out. Eeeew! So when we spent some time in Turkey we used the following technique to manage our holding tanks when pumping out: Next time you are in Greek waters take the opportunity to give the pipes and holding tank a good flush, and do your Hydrochloric acid thing.
ITIKI’s top tips for taming the (saltwater) toot

Thanks to fellow cruisers and FB forum contributors for thought-provoking and colourful discussions on this important topic! This article was also a really helpful one if you need to read further.
​
​Footnote:
​#87.6% of statistics are made up on the spot...
Some Interesting wee facts…