At the end of October as we passed through Gibraltar, we made some significant revisions to our electrical set up, moving to Lithium batteries. Click here to read the blog post about this process.
Schematic of ITIKI's DC System: 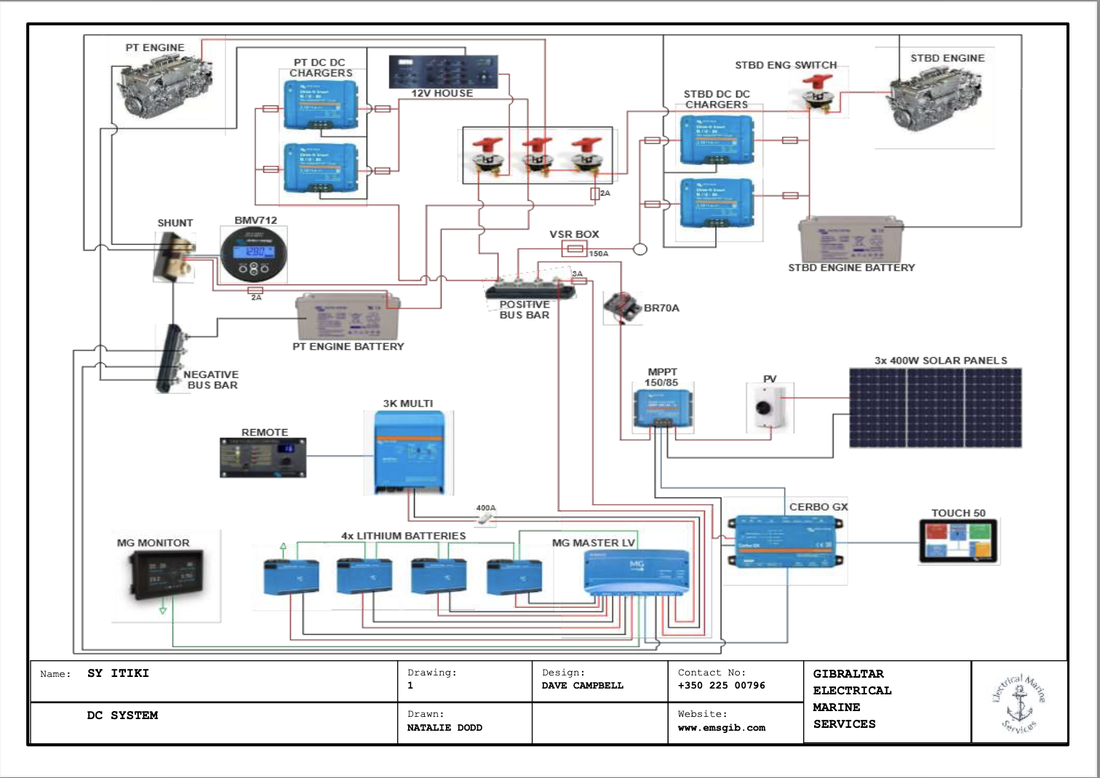 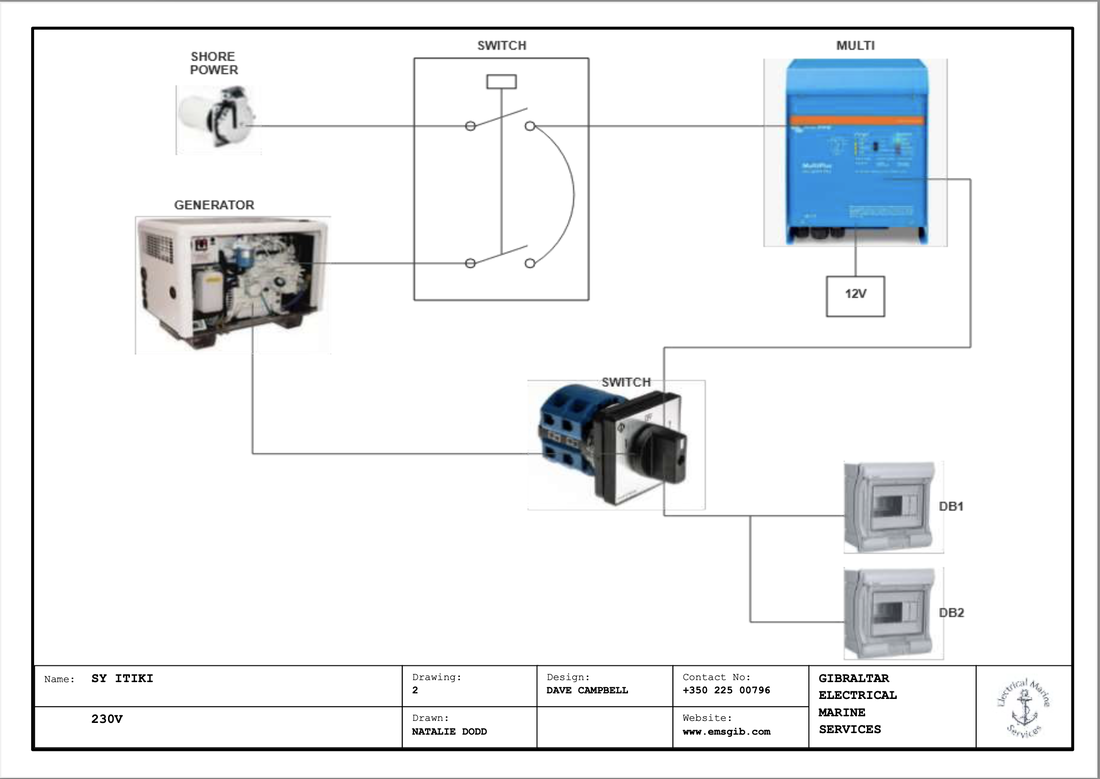 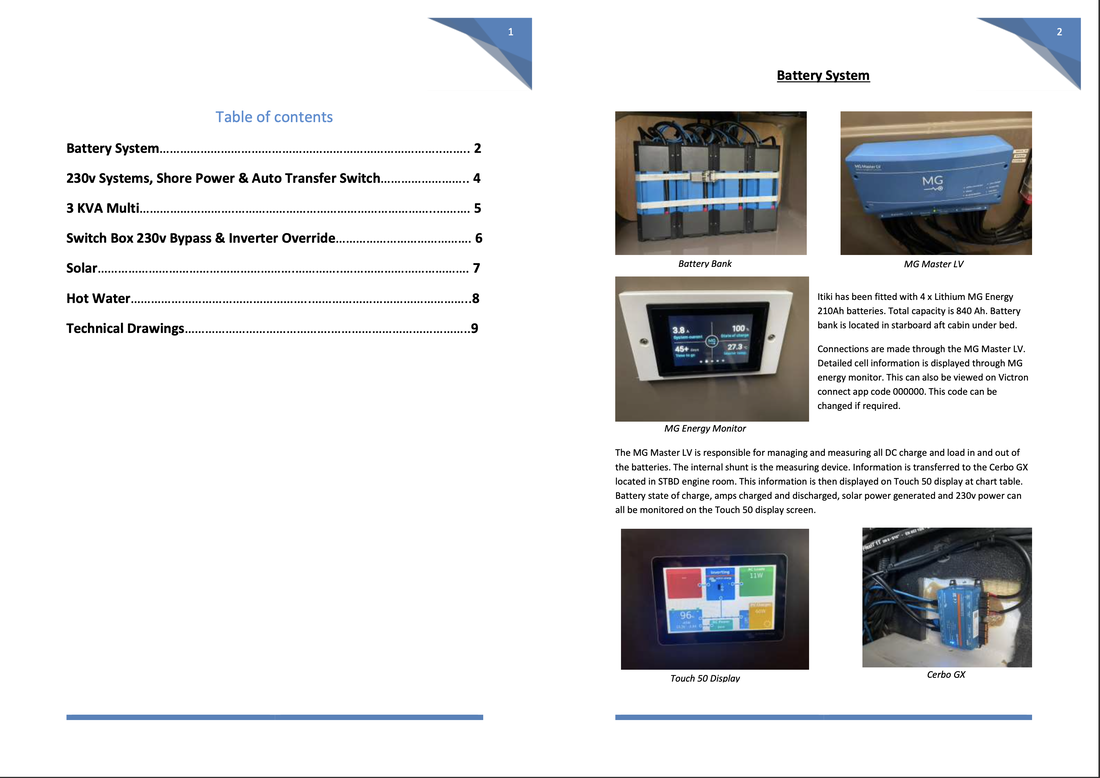 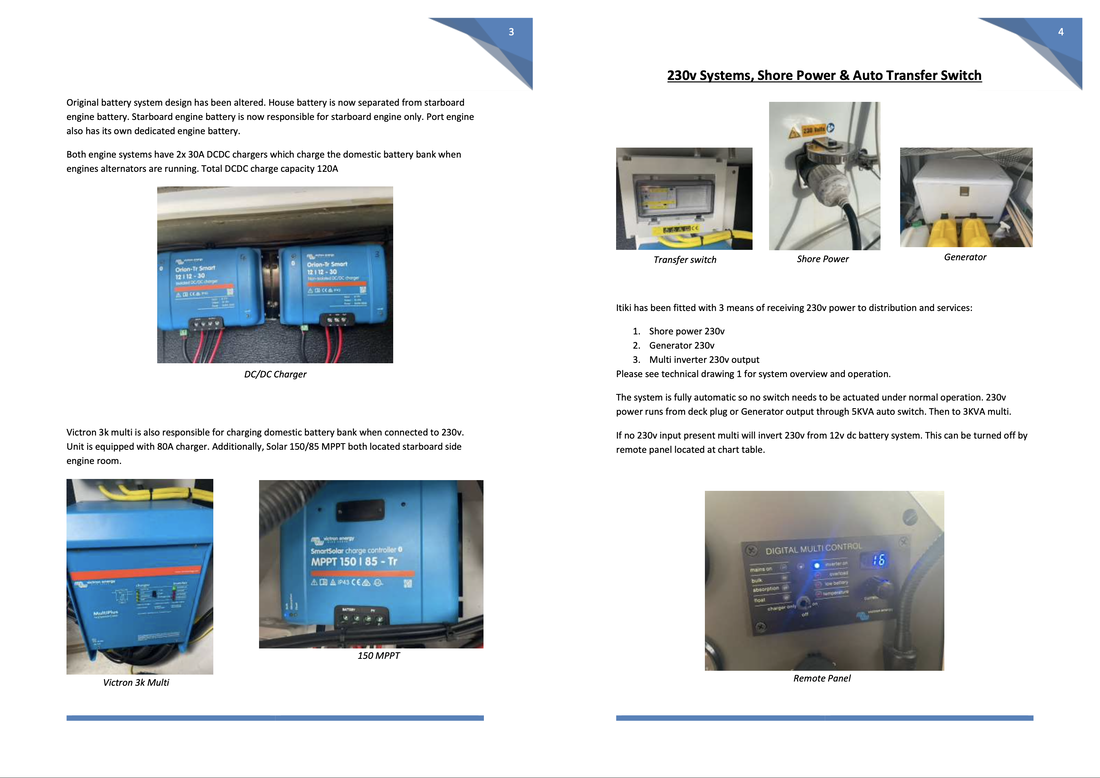 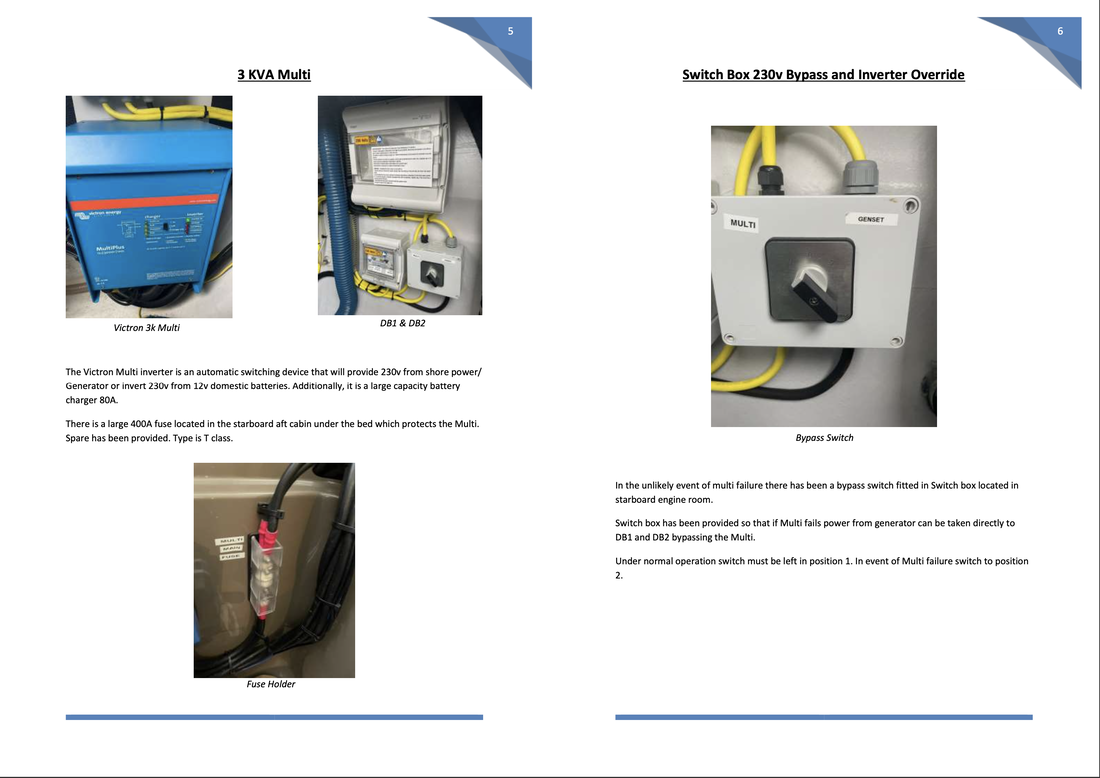 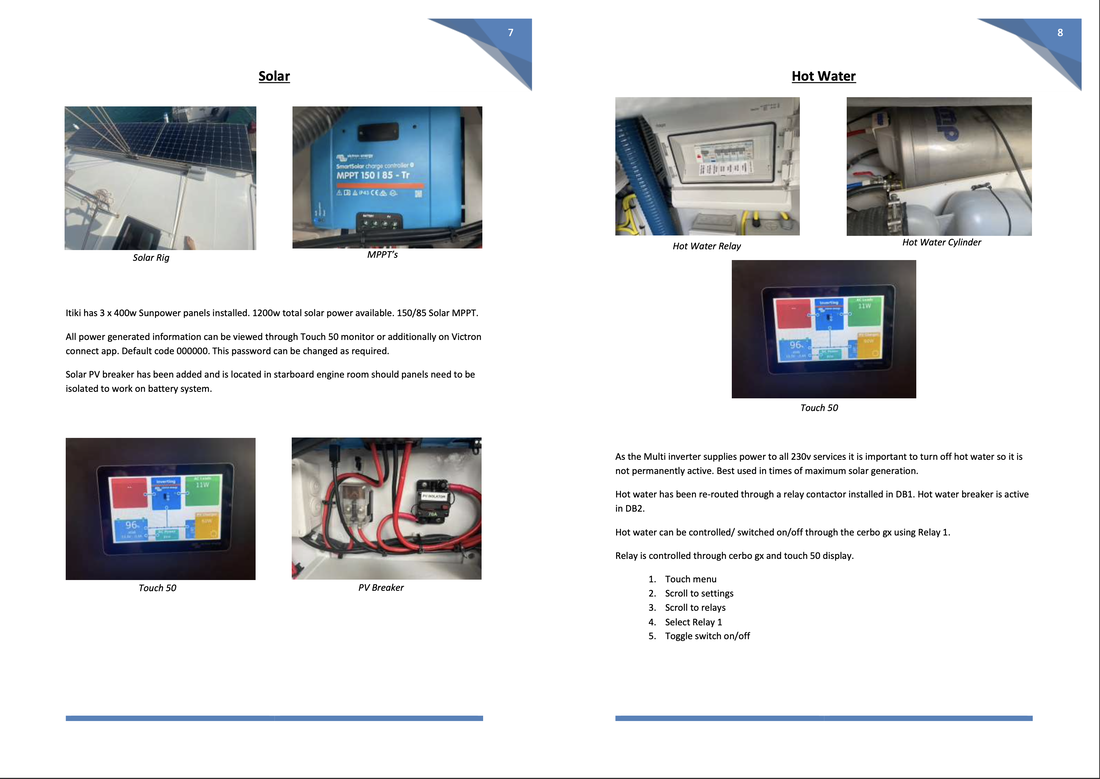 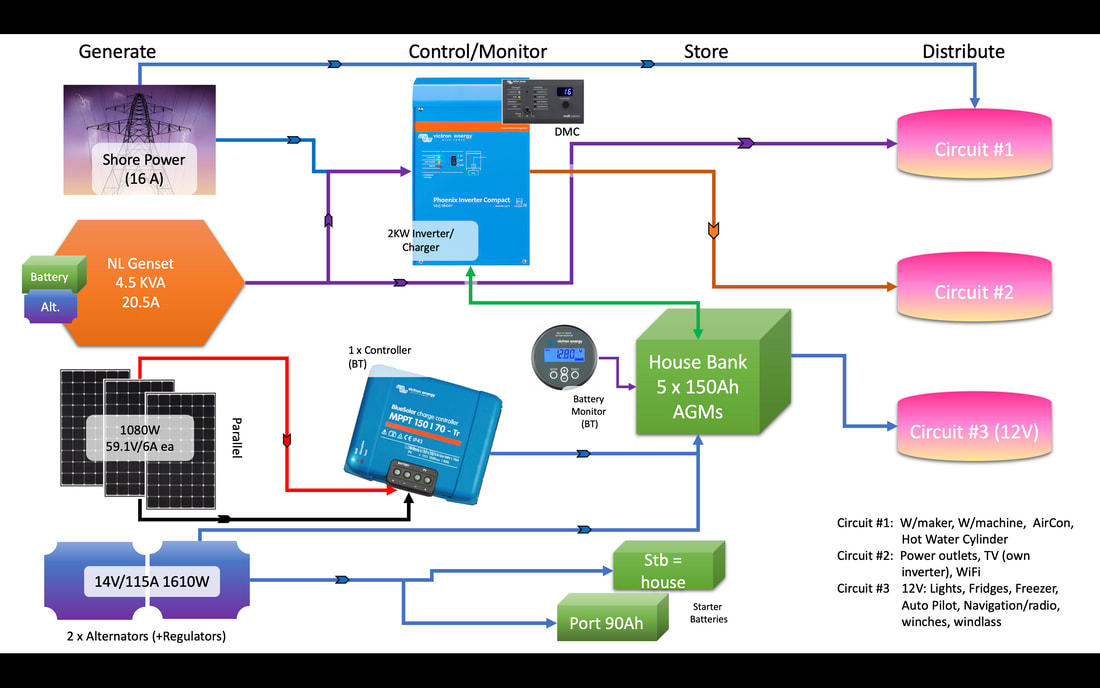 We approached the set up with very little knowledge of marine electrical systems. We had not really defined our needs and even doing so would have been difficult to do without knowing what it would be like to be full time cruising. Although we had a Lipari in Sydney it was run as a commercial boat, kept in a marina connected to shore power every night and mainly motored around Sydney harbour. I could not even tell you how much battery amperage we had!

We did get some advice of course from our dealer and Keith did alot of research. So here is the brief summary of our initial set up:

Generate
Shore power of course, but we find we are rarely in a marina so it is the exception to use this. If we know we are going to a marina we save up our washing!

Genset is a Northern Lights 4.5kVA which Keith decided on based on his research. Reliability - it is favoured by offshore fishermen who no doubt give there generators a hammering. Weight - it is 100kg lighter than the Onan Cummins that is favoured by Uchimata / FP boats. The downside to having Uchimata install this was that they had never done one before and we did not fully test it in situ. The same model can be set to run at 5kVA (60Hz, 1800RPM) or 4.5kVA (50Hz, 1500RPM). We didnt know this and found out the hard way (our 50Hz washing machine would not work on the genset). We finally had it re-tuned in Gibraltar, a month after instatllation.

Solar wise, we had our panels (3 x Sunpower X-22 360W) available in La Rochelle and all the wiring done by Uchimata, but didn't get them fitted as we could not get a frame made in time before France closed for the summer and we left. We left the panels with Uchimata and ended up ordering some more to be delivered to Sicily (Marina di Ragusa) where they were finally fitted.

​Alternators on the engines are the best way to heat the water! These are the standard Volvo ones (Hitachi?) with "dumb" regulators.

Control/Monitor
We took the standard factory-fitted Victron 2000W Inverter, in hindsight a larger one would have been better. At least 3000W to ensure more efficient battery charging from our 4.5kVA generator and shore power.

The Solar Controller is a single 150/70 MPPT BlueTooth enabled. This would restrict us to wiring our solar panels in parallel but that is the best way to avoid shading issues. We apparently would have struggled to find space for wiring to have one controller for each panel.

The basic Victron BMV 712 smart monitor, again BlueTooth enabled, monitors the battery SOC, including the starboard starter. You can check the battery and solar using the Victron App on your iPhone.

Storage
We had 5 x 150Ah Varta deep cycle AGMs. This was plenty of power and in the first season, in our ignorance and without solar, we probably struggled to keep them up to charge and I expect they may have suffered from this. They certainly did not survive 20 months on the hardstand with no load or draw down and trickle in charge from the solar panels. We do have separate starter batteries for each engine. Not exactly sure why but the starboard one was 150Ah and port was actually 60Ah. On some models FP actually use the service batteries to start the starboard engine.

Distribution
We have a "high load" circuit which basically includes the washing machine (a power outlet), the AirCon and the hot water service. We have also added the water maker to this circuit just using a powerboard to the single power outlet. There is a breaker to switch this circuit between shore and genset or off. There is a direct 12V circuit for things like lights, fridges, freezer etc which are all 12V appliances. Then there is an inverter circuit for the 230V power outlets.